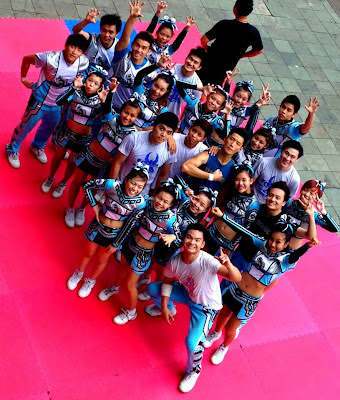 
In a blink of an eye, the months and weeks and days and hours and minutes of training came to end. Our 4min and 30secs routine felt like it went by in the speed of light. We went out and before we knew it, we were done! yes, we did it. A,S,U. It wasn't perfect for sure, but it was definitely the best moment we had so far together as a team. like what coach Fai said, this is, our own nationals. We missed nationals so we had to somehow feel what it was going to be like going for nationals. Only this time, our competitors were all the other CCAs. All going after the attention of everyone looking for a CCA. It  definitely was hard to trying to get people to sign up as the fellow students hardly had any idea that we even existed. it was really very hard...

Looking back, I remember when we were trying out new stunts. Bigger and definitely harder than the stunts that we did for our previous performance. It wasn't easy. Out of 10 times I think we could only go up twice? or sometimes never at all... and coach had to stop us. I still remember when a simple pop up from arabesque to Swedish fall almost killed us. Even coach was pulling his hair out. haha.

Things got even harder when some of our members had to go back to their homeland during the breaks as requested by their parents. Hence we couldn't do much, let alone do the stunts that we were suppose to do. Members were also getting injured. sprained ankles, twisted wrists, pulled muscle and so much more. Some continued to train, some took a break to heal and recover. On top of everything, members on attachment could only make it to training after 7 or even 8 sometimes. It was crazy. Coach got very frustrated we could hardly do anything for the routine as there would be one or two members missing every training.

Slowly our members who went overseas return, those injured got better, and those on attachment literally did whatever they could to rush down. be it taking time off or asking their parents to fetch them from work and send them to school. It definitely got better when everyone was on the mats. But, one of our members had to quit. His injury prevented him from stunting thus he felt that it was better that he left now rather than later. We were one man down...

Somehow at that point of time we already got 1/2 of our routine up... so it was quite hard for coach to change everything again as we were too inexperienced for a situation like this. coach spoke to one of his team members and thankfully, Marcus from Legacy agreed to help us out. We are, very very thankful. 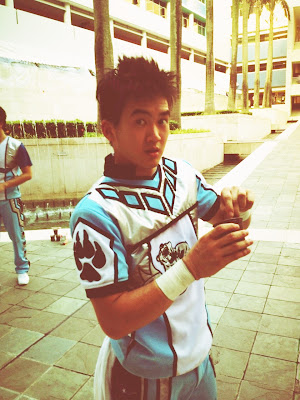 Marcus! Thanks for everything.We wouldn't be able to do it without you. Thanks for taking the time down all the way to NYP to train with us. Thanks for guiding each and everyone of us. We really enjoy having you around, hope you enjoyed training with us too. Trainings isn't gonna be the same without you, we will miss you and your sexy ass hehe.  <3

Now that all is settled, we slowly pieced our routine together. One week before club crawl we were still finishing up our routine and soon we finally tried the whole routine. Just one run and we were all breathless. I remembered the first time we ran full routine. "You all ASU, I let you all go home."  one run was all coach asked for. We were all pumped and ready to go! the music played and we went crazy! Everyone screaming through out the routine "go home!! go home!!" it was so funny. Everyone was just laughing and having fun. routine ended, we.... did... NOT.. asu... :( but coach called it a day anyway because he said our energy was so good that it did not affect our performance despite a few of our stunts not hitting. So we ended training and we all got to go home and rest!!

The week after was crazy! One whole week of training to perfect the routine! Trainings was up and down. some stunts would hit and some stunts wouldn't. It got quite stressful and quite tense, everyone was feeling very cranky as trainings can end as late as 11pm. One of the days our poor dear pat got to OT at work till 8 and we had to wait for her before we could run routine. There was also another day when we had to train in the atrium in the dark. But nothing was going to stop us! Soon we started hitting a few ASU'S! yay!

and then..... OUR UNIFORMS CAME!!! after waiting for so long and going through so many problems! It finally arrived!! We were all so happy and excited to wear our uniforms!! tho everyone was complaining that it was hot and all I think the excitement of just having uniforms for the first time made us forget how hot it was. heehee


Then it came to the tech run. all the CCA's was there.Things were getting quite intense and we were getting nervous as we wait for our turn for the tech run. Waited and waited and it was finally our turn. coach said, "don't just do the routine. perform it." we went out, all the other CCA's went to the front to watch. It was so pressurizing! Music played and were off! The response from the other CCA's was simply amazing! they cheered so loud that it pumped us up even more! it was really awesome!!! From then on, we know we can do it. 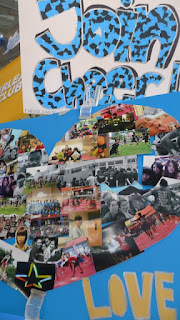 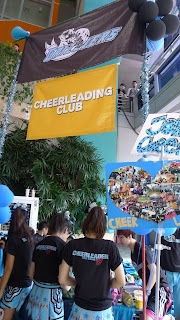 Club crawl finally came! We reported bright and early and the sun was blazing! but we were all out and ready to scout for potential members!!! We went out in full force going all over school to let everyone see our new uniforms and let people know that yes we exist. We wanted as many people as possible to come and watch us so that they know that cheerleading is not just about pompoms. we were sweating profusely under our uniforms thank god our pits got holes! LOL! anyway, it really was not easy to get guys. Many of them just gave us "the look" or would give sarcastic remarks and mock us. but its ok. we went on and just continued looking for guys.. it was close to 1pm and our list was still empty. and then... out of no where... approached by no one. a guy came up and signed up. Our first freshie! and its a guy!! we were so happy and our confidence boosted up and we went out to get more attention again. soon the list was filled up by many. We were very happy! Then it was time to perform!!!! it was funny how we were all loud and crazy before but when it came to perform some of us started to get jitters. even some of the boys too. but coach spoke to us before we went out and we were reassured that we got this! like all the other times we practiced but this time, even better! we went out with confidence and we knew what we wanted, "ASU, AND NOTHING LESS." routine ended and we did it! not perfect. nothing in this world is but we did it!!! ASU!!!

We have come so far, so very far. Now its really up to us to make sure the spirit, the drive, the determination, and the passion lives on and let Grizzlers keep on growing! We are finally recognized in school now. People know Grizzlers and are talking about us. be it good or bad people know we exist. We are not the best in Singapore, but we will work hard to get there. at least now the school knows us. and some people in the cheer scene too! so happy to know that we are slowly getting support and fans from our very own local cheer scene! at least we not so lonely anymore. heehee. We have cheer friends already!!!
Now that club crawl is done we are so very excited to welcome all the freshies that signed up! This year we got a total of 83 girls and 56 boys! we hope that everyone turns up for freshies welcome training on monday!!! Can't wait! Can't wait! So excited!!!


Before I end this post, I would like to thank my coaches. Coach Fai and Coach Jay. Thanks for always believing in us. Thanks for always putting us first before anything. Thanks for always being there for us. You two are the best coaches in the whole wide world :)  The team has grew so much and I hope we've done you coaches proud! Currently Coach Jay is away in the army and we all know although he is away, he always thinking of all of us and we really miss him a lot! WE LOVE YOU, COACHES <3

& Of course, our first captain Cheryl Tan. Our very trustworthy treasurer, Wei Chen. Our very loud 2nd captain, May and the forever sleepy Khoi. There wouldn't be Grizzlers today if it wasn't for you guys :) Thanks you so so much! Grizzlers will grow bigger better and fiercer! <3 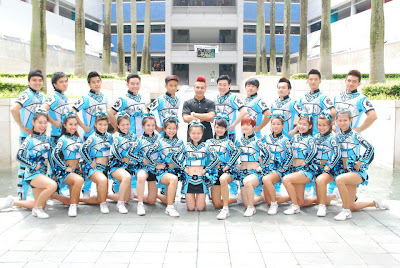 oh ya! WE ARE FINALLY SENIORS!!! GRIZZLERS SENIORS! YAY!!!!

THANK YOU FOR VISITING!